For the latest installment of Gnomad Homies, we had the opportunity to chat with Parker Hilton and Jenelle Kappe from @togetherweroam! Parker, Jenelle, and Emma Mae (their mini Australian shepherd) are traveling around in a 1987 Chevy G20 named Scarlet JoVanson. They have an interesting story and some great perspectives on living the van life, so let’s dive right in!

Planning a van build? Read our free guide. We cover just about everything you need to know – from planning, to insulation, to solar and electrical, to picking appliances, to essential tools. Get started today so you can get out there on the road!

So, where are you guys from?

Originally we’re all from New Jersey…actually, myself (Parker) and Jenelle are. Emma’s from Florida and Scarlet is a mystery. Jenelle and I met on Instagram while I was on another trip into South America hiking the Inca Trail and she was living in Chicago. In a very serendipitous turn, Jenelle pointed out that we both have 732 area codes. The rest is history.

Where are you currently located?

Right now we’re actually sitting still for a minute in New Jersey. We’ve both been traveling pretty nonstop for the last 3 years or so. In order to catch up on life we decided to stay put for the winter and plan for the future. I can safely say that I’m glad we did it but we’re both itching to hit it again.

What are you traveling in? Did you build the interior yourself, or did you buy it pre-built?

I bought Scarlet off Craigslist just over two years ago. She was tucked away in the woods in southern Jersey and from the looks of it, she was parked there a decade or so ago and hadn’t been touched since. That being the case I called the owner and told him if it could make it to the DMV near me, which was an hour drive, I would take it.

Sure enough, he rolled into the parking lot, we exchanged some pleasantries, I handed over the cash and I immediately took the thing home and gutted it. I worked it down to the frame all around and built it back up from there. Solar electrical system, hardwood floors, portable car fridge, bed loft and tons of storage. From there a ton of mechanical work has been done on her but that’s way less exciting.

How long have you been living in this? Do you live in it full time or part time?

We were in her full time for just about seven months. We drove from NJ down to Key west, over to San Diego, down into Baja for two weeks, up to as far north as British Columbia, and back to Jersey. Since then we’ve lived in here for a week at a time here and there but nothing as extensive as that first trip.

What made you want to choose this lifestyle? What was that transition like?

The transition was shockingly easy. I had done something like this before and Jenelle took to it pretty quickly. There’s always the occasional bump in the road or times where you miss a staple of home but then you just embrace what’s ahead of you.

The fun side bar here is that Jenelle and I had only been dating for a few months before we decided to go on this trip together. That was trial by fire in the biggest way. We worked out the kinks in the relationship pretty darn quickly once we got in the van and as a result, we’re engaged —so I guess it worked out alright.

What’s your favorite part about living the van life?

The freedom. Without question. Being able to go anywhere and explore every inch of road that connects to wherever you’re currently parked. That’s an amazing feeling. I love the routine and vibrance of it too. If you don’t like where you are you can always drive a mile down the road to see what’s up there. At the same time, making a fire every night and sharing stories…there’s no better way to end a day.

What is your least favorite part about van life?

Dancing that line between homelessness and adventurer. When you’re in the woods at an awesome camp spot you feel alive and vibrant. When you park in the middle of a city to make a grocery run or visit a friend it becomes very apparent that you’re operating at a different pace than the rest of the world.

What were you doing in life before you decided to do this?

I was a travel photographer/writer in South America. Prior to that, I was photographing fashion work in New York.

Jenelle, on the other hand, is a wedding photographer and our road trip happened to be during her off season. We now both photograph weddings together and travel whenever we get a chance.

What are your favorite features of your van? Anything specifically unique?

The wooden tailgate and the queen sized mattress. When I was building her out I paid zero mind to weight which ultimately proved to be a blessing and a curse. The comforts are all there but the gas mileage and the mobility definitely took a hit.

What do you do for income on the road?

To make money on the road, we write and photograph. I freelance for a few online publications and Jenelle and I both photograph products for outdoor brands.

What have been your favorite locations thus far, and why?

On this most recent trip there were so many that I loved for different reasons. White Sands, NM for sure. We’re both suckers for Vancouver Island and Baja. I also think the badlands will hold a very special place in our hearts for a while to come.

Camping hammocks almost never got used. They were just another thing to think about. However, camping chairs got used almost every chance we had.

Is there anything you miss from your former lifestyle?

Not so much. We have plans to slow down the aggressive travel that was last year but I don’t think at any point we’d go back to the way things were. Could you imagine going back to a 9-5 in New York after three years of traveling? That’d be a tough switcheroo.

What do you do in your free time? What are your favorite activities?

I’d say we have less free time right now than before. Between planning our moves, cooking and setting up camp. There isn’t quite as much time to slack off and update your Facebook page. I wish there was time to read and chill, but between the two of us and work there always seems to be something to do.

What advice would you give someone considering traveling full time in a van?

I wrote a lengthy article for Uproxx about this. The quick breakdown is – consider your daily staples, think long and hard about your budget, know and understand your camping options, be ready to change plans, plan and prepare for situations that will make your travels easier.

(Editor’s note: We highly recommend checking out their article! It gives a very detailed and thoughtful perspective)

What’s your favorite meal to make in the van?

We’re big on one-pot gluten free pastas or stews. There are some gems to be had there.

Gnomad Home is a state of mind and a way of being. It's a rejection of the status quo, and a celebration of the impulse to live a more meaningful life, the way YOU think it should be lived. This can mean living in a van, tiny home, or off grid dwelling. It can mean traveling full time, homesteading in your own place, or otherwise inhabiting a meaningful sphere of existence. The articles here profile interesting people, builds, and modes of living, and are meant to motivate, inform, and inspire.

Check out Meghan and Stephen’s story about the less-talked-about hardships (and rewards) couples face when building out a van and then hitting the open road! 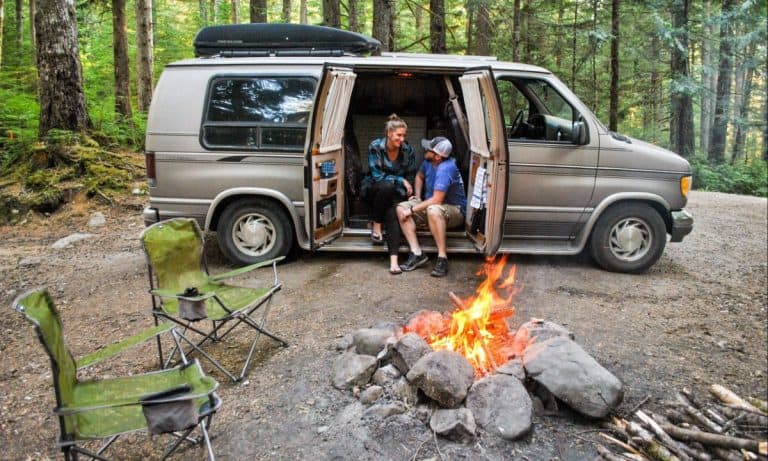 Follow the story of Liana and Tom as they downsized their entire lives, built a van into a tiny home and moved into it full time to pursue creative passions. 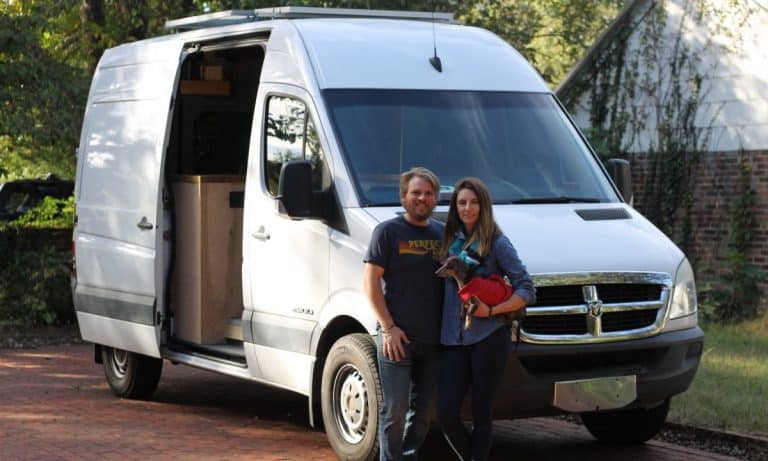 An exciting interview with entrepreneurs Shawn and Brie (and their dog Milo!) as they share their story of living tiny and pursuing jobs as digital nomads. 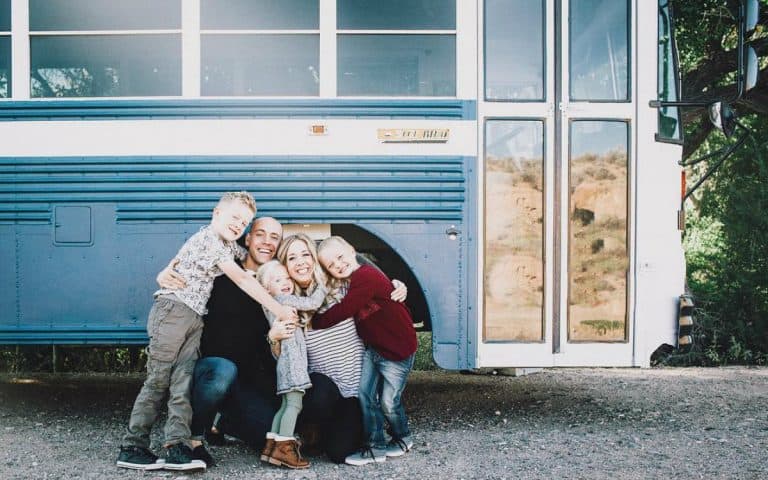 In this edition of Gnomad Homies, we chat with @trebventures, a nomadic family of four. They live in a self-converted skoolie, and are raising and homeschooling their two kids on the road. 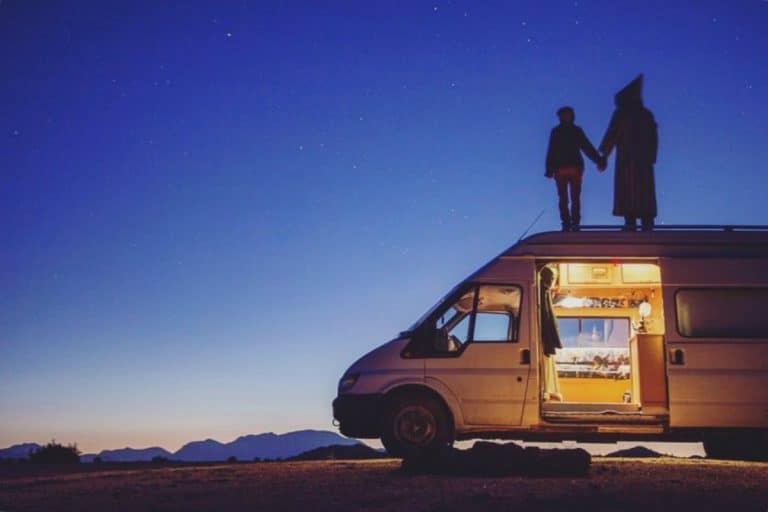 In this edition of Gnomad Homies, we chat with Brittany and Drew of @MrandMrsAdventure about their time living vanlife in Europe and all over the world. Read on to hear their story! 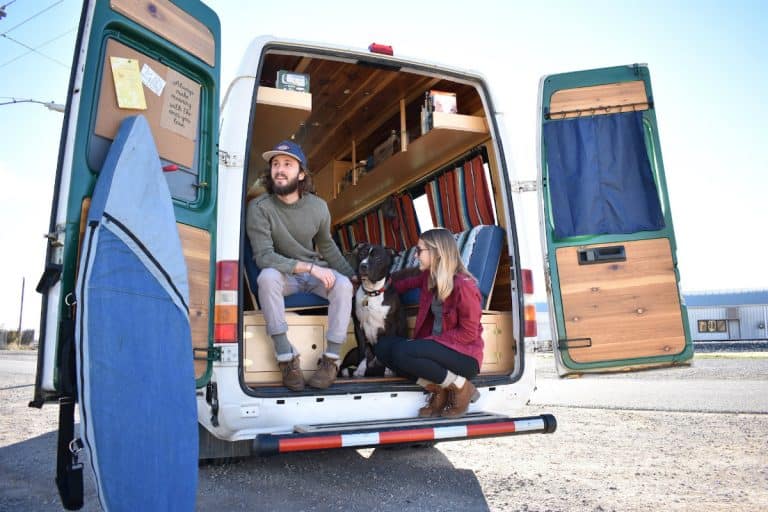 In this Gnomad Homies, we chat with Pete and Tay from @alwaystheroad! Read on to check out their beautiful van conversion, and some great tips on vanlife!